Is it just me or do you see a similarity in people that are fearful of guns and gun owners? I remember the rallies against I-676 (Washington State initiative to register handguns) where a few pro-676 people showed up and a couple years later attending a rally in Olympia (capital of Washington State).  The anti-gun people just looked different. Here I see the same look. I want to say timid but that’s not quite it. I sense a weakness. Perhaps a lack of assertiveness. Here’s the picture: 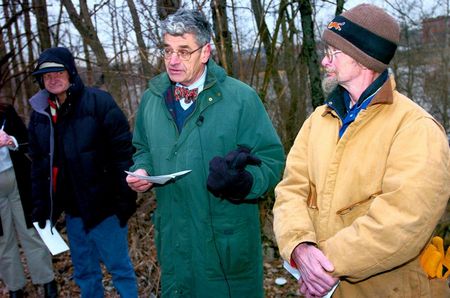 I keep thinking “grass eaters”, “sheep”, and “prey”. Why is that? And is it something that could be changed with training? Would a few hours on the range and in the classroom convert them to “sheep dogs”? Would their appearances change such that other “sheep dogs” such as I, and the “wolves”, notice the difference?

Update: It’s fear. That’s what I see. I figured it out when I was in the shower this morning. It’s like they are in a German concentration camp and they are submitting a petition to the camp commander.

I also should have commented on the text of the article. They say Cincinnati should ban handguns like Morton Grove, IL. That ordinance was held up as constitutional. There’s just one problem. The Ohio Constitution has a provision for the right to keep and bear arms that IL doesn’t have. And of course, there is Just One Question for these fearful people.

Be sure to read the comments to this post. More enlightenment is awaiting you there.