No, it is not the cleanup the Boomershoot participants helped with.  Sunday, while Barb was at work, I drove the hour east to Boomershoot country to tidy up a bit in preparation for the next ATF inspection.

After using over a 1000 pounds of my chemical supply (we consumed 864 reactive targets at Boomershoot 2006) I had some room to rearrange things.  I also removed a couple garbage bags full of old milk and soy cartons.  We used to use the cartons for target containers and I had saved them for testing new mixtures.  We discovered the type of container made a difference in how easy the targets detonated.  Future tests will be made with the actual containers used.  This gave me room for the table we set up outside during production on the north side of the Taj Mahal.  This lets us open the door to the magazine without the table being knocked over and gives us better access to the chemical on the south side of the shed.

This same table has been broken for a couple years.  This year during the building of the targets it collapsed with some targets on it.  There wasn’t any danger of the targets exploding from the slide to the ground but it was not pleasant and someone could have gotten hurt anyway.  It needed to be fixed and I have been meaning to do that every year.  I still need to do some sanding, buy the screws, and put them in but I have made a significant amount of progress on this long overdue task.

I was pleased to note that the batteries were fully charged by the solar cells.

I swept the floor which had a couple dustpans full of dirt on it from all the travel in and out with muddy feet.

I ran the generator for a few minutes to warm it up so I could change the oil–which I did at lunch time in my parents shop.

I took the floor mats to my parents place and hosed them off.

I cleaned the air cleaner and put in a new filter.  I burned the old filter which was filled with potassium chlorate dust.

I removed all the miscellaneous mixing utensils we don’t use which have gathered over the years.

I brought home two blenders that “froze up”.  The chemical contact apparently had corroded the bearings (ammonium nitrate is particularly hard on metal).  I’ll see if I can repair them easily, if not I’ll buy at least one more for backup to the two remaining ones.

I did an inventory of chemicals we use (there are some chemical types we have used for testing that I didn’t inventory), and the target containers.  I still need to inventory the remaining stakes.

The following pictures are after clean up and putting all the remaining stuff, including some empty garbage cans, back in.  I’m pleased and I hope Crystal, Sue, or whoever the ATF sends to visit this year is as pleased as I am. 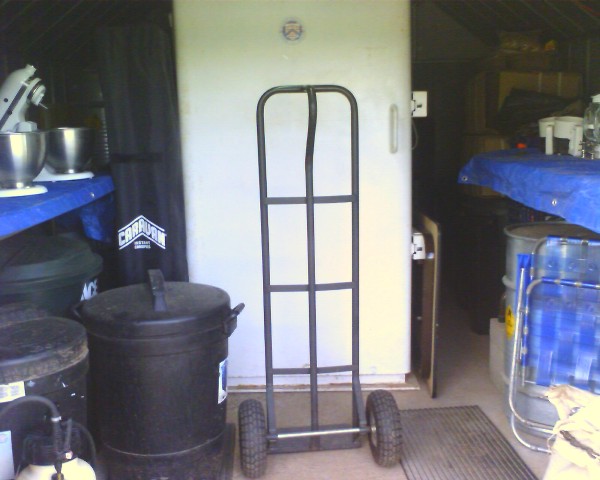 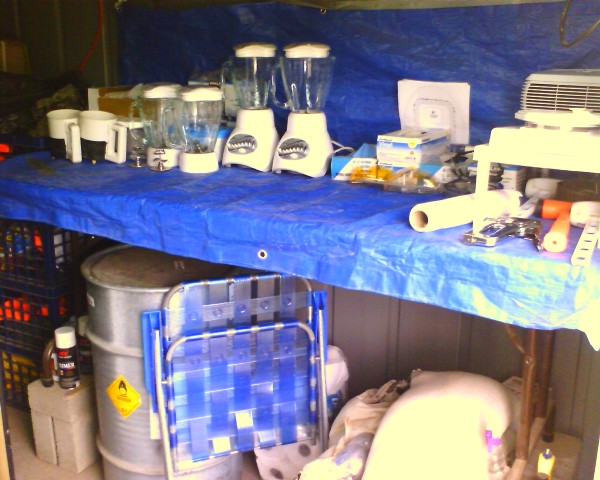 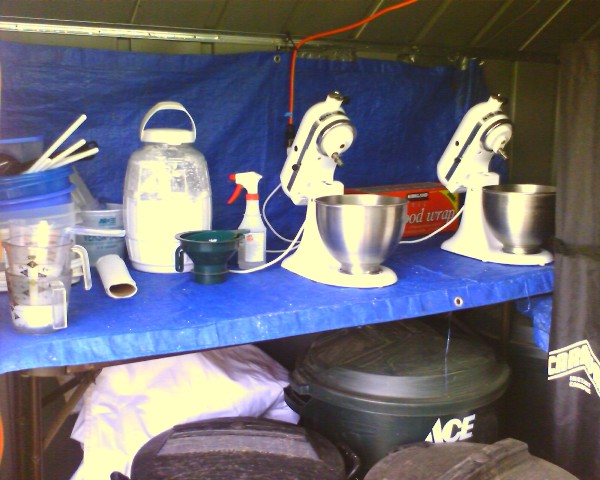