This morning I finished cleaning my heavy barreled AR-15 and then cleaned my .300 Win Mag. It was raining but was supposed to stop by midday where I was headed (they were wrong). I packed up my rain gear (a poncho), gun gear, hunting knife, computer, some food, and water. I had to mail some stuff to one of my lawyers and finally got out of town a little after noon. I arrived at the Boomershoot site a little after 13:00. I walked from near the 380 yard line to the Taj Mahal about a quarter mile away taking about 1.5 hours going slowly around the area, nearly twice, in opposite directions. I expected to find a deer in the tall grass or under a tree where I had seen two deer before. Lyle and his son and I had seen three deer about two weeks ago. No such luck today. I got soaking wet from the knees down. I did a little work at the Taj Mahal and dried out a little bit. I didn’t warm up any though. After an hour or so I left and as I drove south over the hill toward South Road on Meridian Road I saw two deer. One was stopped looking at me from about 100 yards away. I stopped and watched as the first one ran away and the other just stared at me. It was on land I didn’t have permission to hunt on. On the other side of the road was more land I didn’t have permission to hunt on. If it crossed the road I couldn’t shoot it while it was on the road. It was safe from me for over 400 yards in any direction. I drove on and it ran away as I got closer.

I was cold and damp and was enjoying the warmth of the van. I decided to do some “road hunting.” I would drive around for a while and see if I could see anything from the roads on any of the land I had permission to hunt on. I drove slowly north into a field we call “The 120”. Nothing. I turned around and slowly drove back out to the main road. I drove west on South Road and then north on Newman Road. I turned west into another field where Lyle, his son, and I waited for dusk and deer to appear before. Last time dusk and then darkness had arrived without any deer.

About 16:00 I parked and set up to wait for dusk and the hoped for deer. An aerial image of the location is here. The top strip of green is trees and brush. Just to the south (down) is my parents land. In the middle of the picture, going north-south, is a strip of grass in a draw. It is called a grass waterway. I had parked my van just south of where the grass waterway bends to the east. Using the van for shelter from the breeze and the rain I setup and waited. I fired up my computer and used the hot air from the fan to dry the ocular lens that had water drops on it. I checked temperature, 46 F, and the barometric indicated altitude–3000 feet above sea level. I put the information into Modern Ballistics and used the laser range finder to get distances to the nearest trees and various landmarks in the grass waterway. I set the scope angle to an indicated 5.75 MOA. Using the 180 grain Federal Power-Shok cartridges for my .300 Win Mag that would give me a zero of 234 yards and a point blank range of 273 yards with a point blank size of 4.8 inches. The nearest trees were about 270 yards. Anything my side of the trees could be hit within 2.4 inches of my point of aim without adjusting for elevation–assuming perfect ammo, gun, and shooter. None of those were perfect but from 200 to 260 yards the point of impact should be +/- 1.4 inches assuming everything is perfect. The deer, almost for certain, would be within that range if it appeared.

At 16:40 my daughter Kim called to discuss snow tires for her car. I chatted for a while then saw two deer walk out of the woods and stroll slowly to the east. I told Kim, “I’m out hunting and I just saw two deer come out of the woods. I want to shoot them now.” We said good-bye and I turned my attention to the deer. The deer were together in the center of the grass waterway having just come out of the woods. My laser range finder said I was 255 yards from the lead deer which was broadside to me and a better target. I was aiming just ahead of the shoulder as it was walking into the shot. The gun went off without a conscious thought from me–IPSC does that to you. In IPSC when I’m doing things right I find that as the sights are aligned on the target the gun goes boom without me knowing it was going to happen–even when it’s happening three times a second. Just as I pulled the trigger the deer stopped and put it’s head down to eat. In the 0.3 seconds the bullet took to reach it’s target the deer would have put it’s heart into the path of the bullet. But because it was stopped the bullet got it’s spine instead of the heart and lungs–we both got lucky. It would be hard to get a cleaner, quicker death than a completely severed spine between it’s head and heart. I got an easier job of cleaning the chest cavity and have more eatable meat. 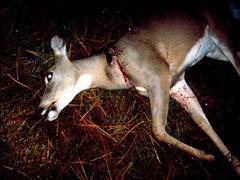 The untouched deer after being shot. Click for a larger image, then click again for still larger.

Another example for doubters of Myth Busters. The deer fell toward the shooter (actually it turned 90 degrees toward me then fell over so the long axis of it’s body was aligned with me). You are looking at the exit wound side of the deer. It did not get pushed or knocked down by the bullet impact. It’s spine was severed and whatever muscle twitches remained caused it’s only motion as it crumpled to the ground.

The other deer jumped and ran a few steps before stopping and looking in my direction. I wondered at first if I had missed and this was the deer I had shot at. I looked closely through the scope and could see the white from the belly of the deer I had shot. It was motionless. I quickly packed up enough to drive to the downed deer. The still standing deer didn’t run away until I had started up and was moving toward it.

I parked the van next to the deer and started cutting on it. I then called Doug to tell him and hoped he would volunteer to come help. He did. When he and his son Brad arrived about 10 minutes later it was getting dark and it was still raining. I was doing this for the first time and progress was slow for me before Doug arrived. Doug brought a hatchet that we used to break open the pelvis and the sternum. After tagging it and emptying the body cavity we put it on the tarp in my van and drove back to his place to skin it while hanging up in the machine shed.

I called Kim back after the gutted deer was in the van and on the way to the shed for skinning. She asked if she was still going to get some of the meat. I told her, “Of course”. After talking to Kim I called Xenia and told her I would be home a little late because I had got my deer.

In the shed we had artificial lights, a roof over our heads, and equipment to hoist the deer up to chest height for easy skinning. 1.5 hours after I took the shot it was gutted, skinned, and wrapped in a tarp in my van.

I went inside to visit with my parents and clean up a little. I wore plastic gloves and my poncho while working with the deer so I didn’t get much blood on me. I just had to clean my knives and a little bit blood from one sleeve of my shirt. Mom fixed me a peanut butter, jelly, and lettuce sandwich and gave me a glass of milk for my supper. I left my parents place at 18:30 and was home, parked in the driveway with the carcass of a white-tailed deer in my van by 19:30. Tomorrow it will go to the meat cutter who will age it, then cut, and wrap the meat.

Interesting coincidences–I have harvested (using Barb’s Jeep rather than my rifle) only one other deer before. It also was on Halloween and just seconds prior to downing it I got a call on my cell phone. That time I was on the phone talking to Barb when the deer jumped out in front of me and the impact caused compound fractures in both its hind legs. I killed it with my pistol and again Doug came to field dress it.

Doug asked me if I got sick to my stomach as I pulled the trigger. He still does sometimes. Other people get very excited and can’t shoot worth a darn when a deer gets into their sights. I didn’t feel any excitement or sickness–just the recoil of the rifle on my shoulder. There was no particular joy or sadness either. Just another four legged, crop eating pest was dead and I would have some meat to share with my children over the next few months.

More pictures from my first hunting season are here. Tomorrow, after the light is better, I plan to update the photo album with pictures of the entrance and exit wounds.

Update: I took the deer to the meat processor Tuesday morning. While on the scales with head and legs still attached it weighed 79 pounds. The photo album has been updated with pictures of the entrance and exit wounds.

Update2: Information on whitetailed deer. Also of interest is that in Clearwater county, where this deer was harvested, a collision with a deer is the most common form of car accident.

4 thoughts on “The white-tailed deer in my van”