The UK Times Online uses the headline Leap in life expectancy brings a scare for pension forecasters.  But it’s the socialists that really need to be scared: 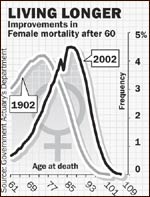 ACTUARIES admitted yesterday that they were scared to predict firmly how long humans would live in the future, after releasing new figures showing that survival rates improved by more than 30 per cent in just eight years.

Figures from the Continuous Mortality Investigation (CMI), part of the actuarial profession, showed that the mortality rate for men aged 65 in 2002 was 29 per cent better than in 1994, while life expectancy for women improved 33 per cent in the same period.

There is also concern over the growing cost of public sector pensions, which has doubled to £500 billion in just over ten years. Sir Digby Jones, the Director-General of the CBI, this week warned the Labour Party conference that “little has been done to address public sector provision in the face of people living longer and healthier lives”.

A socialist society of the future is going to be faced with some hard choices.  As health care technology improves people live longer and it seems the costs invariable increase as well.  This is a double whammy for the socialist.  They will be increasing unable to provide for both pensions and the health care of the elderly at the expense of the working class.  As I have pointed out in previous posts a common solution to the inevitable fixed budget is to ration health care.  In effect what this does is decrease the quality and the length of life for the people that are more deserving of a longer and better life–the people that contributed the most to society by being productive.  Faced with that penalty productive people have less incentive to be productive.  This decreased incentive results is less productivity and society as a whole suffers.  The more socialistic a society the less productive it becomes and the less able it is to compete in a global market.  As our human life expectancy improves socialism faces it’s death.

2 thoughts on “The specter of death for socialism”