After four days in storage (more than required for a typical Boomershoot event) the mix looked like this (click on a picture to get a high resolution version):

All looks good.  There was only the slightest hint of clumping.

I used the dead tree to hold the 7″x7″ target while doing sensitivity tests. This was after four days of storage. Multiple hits of a .22LR with a target velocity ~1170 fps failed to detonate it. .22LR with a velocity of ~1500 fps detonated it on the first shot. At the time of mixing 1170 fps would reliably detonate it.  The top of the tree was moved rearward and caught by the live tree.

It was typical Boomershoot weather–wet. I wrapped the targets in plastic to keep them from getting water logged. 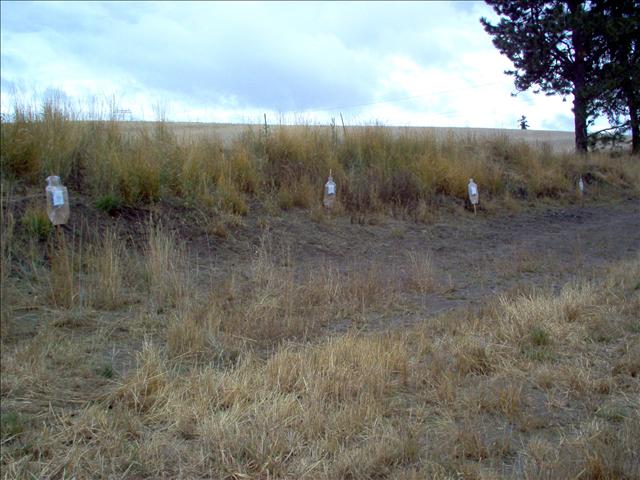 I was unable to hit them at 700 yards with my .223 without a spotter. I moved them to 380 yards to test sensitivity to at least get some hits with the AR-15.

The 50 grain VMAX bullets, with an estimated target velocity of 1970 fps, were successful in detonating the targets. I had not anticipated all the plastic scraps. I will return to pick them up. I ran out of time and had to leave.

I have video of the target detonations which I hope to get digitized sometime this week.  In the scope I saw a bright red flash as the targets disassembled in a cloud of smoke but I don’t know if it showed up in the video.

I did not have enough time to do the last test–Boomer Clays.  I did get various types of high velocity shotgun ammo that at least has a chance of working.  Those tests will have to be another day.  Perhaps this Sunday if the range work and rock blasting goes quickly.