We took another blow to our freedom this week without it breaking into the main stream media (minor news sources only), without a law being passed in Congress, the President signing an Executive Order, or the Supreme Court redefining the Constitution.

I got this email on Tuesday from my brother:

I just heard at Primeland an hour ago, Agrium has announced they are
shutting down their ammonium nitrate production.  They have about 4000
lbs left at Cavendish, that is the end of it.  They indicated we can
have that if we want it, but we have no place to store it.

This announcement seems to have caught everyone off guard.  We knew
Agrium was the last producer of it, but everyone seemed to think they
would be producing for a few more years.

Agrium (see also their press release on this topic) was apparently the last remaining manufacturer of AN in this country and I think on this continent.  Primeland is the supplier for a lot of the chemicals in the Cavendish area where the Boomershoot is held.  The last several years (when I started using more than about 200 pounds in a year) I bought this main component from them.  One of the local workers at Primeland has attended the Boomershoot as a spectator, has a friend that shoots there occasionally and “really wants to attend” but frequently has to work during that busy time of year for the farmers.  He called up Doug to give me a chance to grab the last of it they had left.  Doug and I knew this day was coming but thought it was at least a couple years away.  I was going to wait until the end of this month and buy maybe 1000 pounds for next year’s event.  This forced my hand.  There won’t be any more fertilizer grade AN produced in this country.  I barely mentioned this to anyone because we have people wanting to shut us down and cutting off my supply of AN for next year would have been way to easy for them until I had it in the back of our truck.  I had to improvise on storage and store some of it in places I really didn’t want to store it (fear of loss, not fear of hazard).  But I did it because of the importance of having a supply for the next few years.

We bought it today to give us the optimal amount of time to get the money in before the bill comes due.  Please send in your Boomershoot 2006 entries early if you can.  I need the money to cover that bill when it comes in on the 19th.  I don’t have a job right now and things are a lot tighter around here than I would like for them to be.

I had about 700 pounds left from my previous purchase of 2600 pounds in 2004.  Today I bought 3480 pounds.  That’s a total of about 4200 pounds.  To put that in perspective, McVeigh (spit, spit) used about 5000 pounds.  He is a major contributor to the shut down of production in this country.  Anyway, 4200 pounds is enough to make a pretty sizable boom or collection of booms.  Assuming Boomershoot uses about the same number and size of targets my supply will last for five years.  That should give me enough time to find a supplier of explosive grade Ammonium Nitrate that isn’t premixed with fuel oil or something else that ruins it for me.  Or maybe find another explosive to use for the targets.

An FYI–the main ingredient in Tannerite is ammonium nitrate also.

Here are a few pictures from today’s efforts: 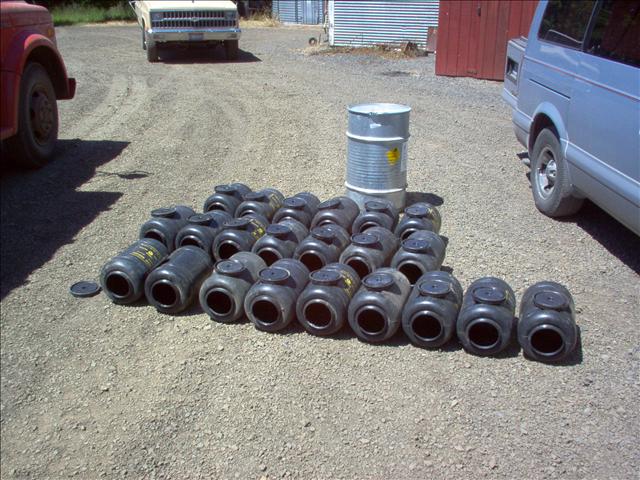 Drying out the inside of some of the storage containers. 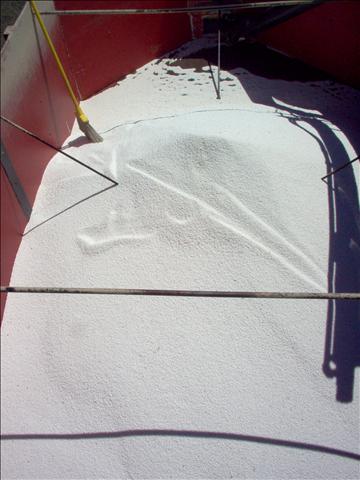 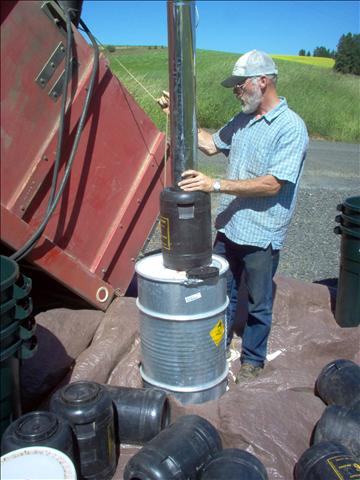 My brother Doug helping to fill the containers.

There are a few more pictures here.

Ammonium Nitrate in the news this week: