Kim didn’t show up on time and was some place other than her house because of some dispute with her roommate or her roommate’s boyfriend or the seven cats or some such thing.  We couldn’t even find her.  She left her cell phone in our living room so we couldn’t call her.  This was very much unlike Kim and I was worried about her.  James had spent the night and of course Xenia was there so the three of us picked up Sara and left nearly 40 minutes later than we planned.  I asked Barb to keep calling people and asking about Kim.  Kim called about 12 minutes later.  She was very apologetic. Someone had borrowed the cell phone she had borrowed to use an alarm.  It was in another room and no one heard it go off or had turned it off.  I told her to just meet us there.  We arrived on site and found the ground wet and very soft.  I nearly got stuck going through the wrong part of the creek on the way to the Taj Mahal. The creek was completely dry five weeks ago.  We starting setting up.  Xenia and Sara pounded the stakes in the ground.  James and I setting up to make explosives.  Kim showed up still in her pajamas.  She hadn’t even gone to the bathroom yet this morning and she had her toothbrush and toothpaste with her.  She and I went to my parents place to get ten gallons of gasoline for the fireballs and we both used the bathroom.  Dad wanted to show me the new tractor and so I lost another five minutes there.  We got back to the Taj Mahal and still had more setup to do.  It probably took another 30 minutes before we actually started making targets.  We are at least an hour behind what I had planned.  Kim forgot to take her medicine and had to walk back to her car and walk back out again, we were probably 20 minutes without her.  Once she came back however she really cranked out the targets.  If it hadn’t been for her we would have been very, very late getting the targets done.  As it was we were about 20 minutes later than what I had told Dave.

I did the shooters meeting while Kim took Xenia and Sara to my parents place then came back to blow the air horn for the ceasefires.  Xenia and Sara had homework to do and had their jobs completed.  Dave and ten others set up and started shooting.  After ten or fifteen shots a boomer detonated.  It wasn’t as powerful as I expected.  People started saying they were hitting them without getting a detonation.  I was worried.  Something wasn’t right.  We called a ceasefire and James, Kim, and I examined the targets.  There was a problem.  They were getting solid hits without detonations.  A closer examination showed why.  We took apart each target, while crouched in the mud, fixed the problem and remounted the box on the stakes.  The wasn’t something Kim or James had done wrong while packaging the material.  They did it exactly as I had told them.  It was one of those things you never would have thought of until you did the tests.  Moving the targets 300 yards and a few hours in the space time continuum had screwed us.  I’m so incredibly glad we did this real world test three weeks before the big event. We only had 50 targets we needed to rework while 11 people were waiting on us rather than 600+.targets while there was 100 people waiting.  The boomers started going boom.  Frequently there would be ‘smoke’ (water vapor actually and powdered lime) from multiple boomers in the air at once.  They eventually stopped shooting about 15:30.  They said all the targets were gone.  James, Kim, and I started setting up the fireball targets.  There were still several targets left.  Some completely untouched. This is tyipcal.  It’s tough to see everything from 375 yards away.  Dave and his gang drove across the bridge and walked out to the target line. They lined up about 25 yards from the berm and I ignited 11 flares behind the 11 gallons of gas behind the 11 reactive targets.  If you look closely in this picture (click on the picture to get a hires version) you can see the flares.  In this next picture the hot spots have grown some: 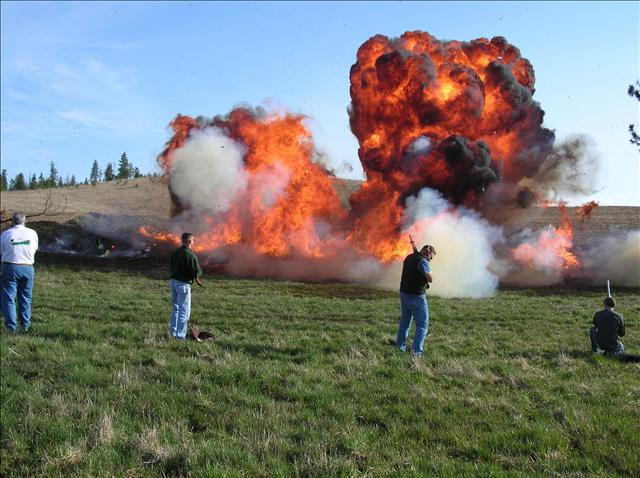 The second guy from the right is dodging some material that came back his way.  Kim said she got hit with some dirt.  Everytime we have shot stuff up close she gets hit with something.  Always before it was a prill of ammonium nitrate.  No AN prill this time but at least she has her 100% hit record intact.  There were lots of big grins on the people’s faces when they left.  A couple of them signed up for the event on May 1.

The complete photo album of the adventure is here.  Click on the pictures to get a larger version.

Ry showed up as we were almost comletely done with clean up.  He was delivering some Tannerite.  We did some very quick tests and found it was no more senstive to impact than our mix and couldn’t really tell it apart in terms of power.  It’s far, far more expensive however.  It’s a binary explosive and can be shipped via UPS so it’s a great product for a lot of people but it’s not a market I want to get into with our mix which has four ingredients.  Ry’s alternator light came on just as we were about to leave at 18:00 and he still had 8 hours of driving ahead of him as he has to go back to Redmond and Microsoft tonight.  He figured he could make it to Moscow on his battery and figure out things there.  I brought the kids back to a nice meal Barb had prepared for us.

I’m tired and it’s been a long day.  Enjoy the pictures and start planning a Boomershoot for your future.