I finally updated numbers of the referrals from the various bloggers.  My ISP had some problems for a while and I didn’t have any log files for several weeks.  That has been corrected.  I also changed the target size information.  I may change the target number (up, not down).  I need to run some numbers first.  But my guess is I need more targets now.  The new targets are four and six inch squares instead of four and six inch circles.  The rectangles will be easier to hit.  The largest target is now a 7 3/8 x 7 3/8 rectangle compared to the old 8 inch circle.  So that will be just slightly larger.

I also updated the general information page on what to bring.  The biggest change there is I removed “tarp” from the options to shoot off of.  Shooting off a slick tarp on the built up shooting positions can be “challenging”.  A non-skid shooting mat is preferable.

My family, from the farm, showed up for Barb’s birthday party yesterday and I found out there have been several grass and brush fires in the neighborhood recently.  Most years there would still be snow on the ground.  But this year they are having fire problems in mid March!  I probably will have to take special precautions to reduce the chances of fire this year.  Unless of course it snows on us–which has happened.

Here are the pictures from the party.  A sample: 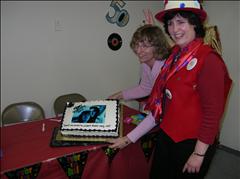 The video I made for the party, Barbara Scott From 1 to 50, is here.

Update: Barb requested that I make a slight change in the movie. She was right, it made it better. The original is here.

I found some more pictures in my camera, browsed through the pictures that were in Xenia’s camera and put a few more up.

Sheep can be controlled by the sheepdog for the same reason they fear the wolf — they are both predators.  The same relationships hold with the general population, the police, and the criminals.  Most people are sheep, but you don’t have to be.  If you have the skills and attitude of a predator the criminals will leave you alone — because they will recognize you as a predator and there is easier game available.