Barb and I approached the butte from three different sides without luck.  Barb commented that this was a Ry type adventure.  Those that know Ry will understand.  We had driven by a driveway with a name I recognized as a Boomershooter so we turned around and went to ask his advice.  Jim told us we couldn’t get to the top without crossing some private property that did not belong to him.  He suggested we walk most of the way to the top on his property so we accepted his offer.  Elevation wise we were within about 600 feet before we turned around and came back.

Pictures are here.  The weather was just a bit unsettled but pleasant enough for a hike.  It made for some nice cloud pictures.  If you know what to look for in the first four pictures you can see the Boomershoot site.

We went on to the Taj Mahal to test the new mix.  The material did not turn into a solid mass like some of the previous mixes had.  It was just slightly caked however.  Overall it looked good: 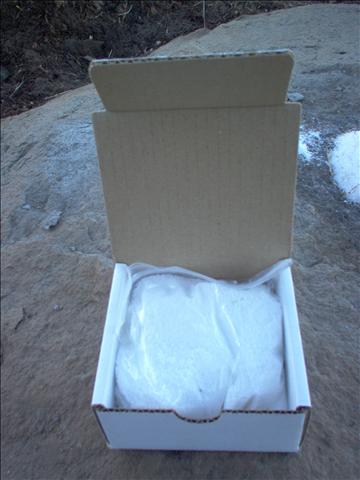 Another really good sign was that the small sample I had left out had not spontaneously combusted when it was exposed to sunlight for a week:

Next I fired a shot from the .22 that should have hit with a velocity of about 1170 fps.  It did not detonate the target but it did tip it over.  I loaded the high velocity ammo and shot it three times on the edge.  It did not detonate.  I put the target upright and it then detonated on the first shot.  Estimated target velocity–1540 fps.  The edge hits were going through three layers of cardboard so I suppose it’s possible that the extra cardboard slowed down the little 38 grain pellets enough to cause the failures.  At this time I am pleased with the new mix and packaging.  It’s rare that we will ever store things more than a week and if it still detonates with a 38 grain bullet at 1540 fps that is probably good enough.  In another couple of weeks I’ll do the final tests.

We stopped by the new shooting positions we created last fall and looked at the grass Ry had planted.  It seems to be doing well.  In another six weeks (Boomershoot 2005) I expect it will be usable.